Natural gas is probably best known to consumers for its domestic uses of heating, cooking and cooling, with residential use accounting for around 22% of overall natural gas consumption. Its demand has been on the rise the past decades, which highlights the central role that natural gas has in today’s global energy market. The reason behind its popularity is evident: it is a very good source of electricity supply, it is defined by easy storability, and it produces low carbon emissions.

In a transitional period from fossil fuels, to renewable energy resources, natural gas does not only have the same base load power as the former, but is also cleaner. This makes it, in fact, the perfect bridge energy resource to satisfy this transition. Another important aspect of Natural Gas is it’s operational flexibility. LNG (Liquified Natural Gas) and CNG (Compressed Natural Gas) is natural gas which either through being super-chilled (less than 0.17% of its volume), or compressed (less than 1% of its volume) is much safer and easier to be transported with purpose-built LNG vessels or long haul trucks. Storability and an average construction time of 2 years for a gas plant, makes natural gas one of the most operationally flexible resources. Consequently, it has the advantage of being a resource easy to respond to short-term demand fluctuations.

Concerning the production of natural gas, the main producers are the US, Russia, Iran, China, Qatar, Canada, Australia, Saudi Arabia, Norway and Algeria. The US is the leading producer, with a production of approximately 915 billion cubic meters in 2020, and it is followed by Russia, which is also the world’s leading gas exporting country.

In 2019, the European Union imported 60.6% of the energy it consumed. Regarding natural gas, Russia, Algeria, and Norway were the three main external producers, with Russia accounting for about 40% of the European Union’s gas imports. To effectively supply these vast quantities of natural gas to the EU, Russia has built a large network of pipelines crossing the majority of the continent. One of the main pipelines used, built in 2011 by Gazprom, a Russian global energy company that is majority state-owned and holds the world’s largest natural gas reserves, is the Nord Stream 1 pipeline — the longest subsea pipeline in the world. Today it accounts for about 40% of all natural gas exported from Russia to the EU. A parallel pipeline, Nord Stream 2, was built this year, but due to geopolitical concerns, bureaucracy and additional regulations, it has not yet received the green light to operate. For the UK, most of its gas comes via pipelines from Norway — the continent’s largest producer after Russia — or as shipments of LNG, predominantly from Qatar, and more recently from the US and Russia. The UK also imports a small proportion of its gas via pipelines from the Netherlands and Belgium. 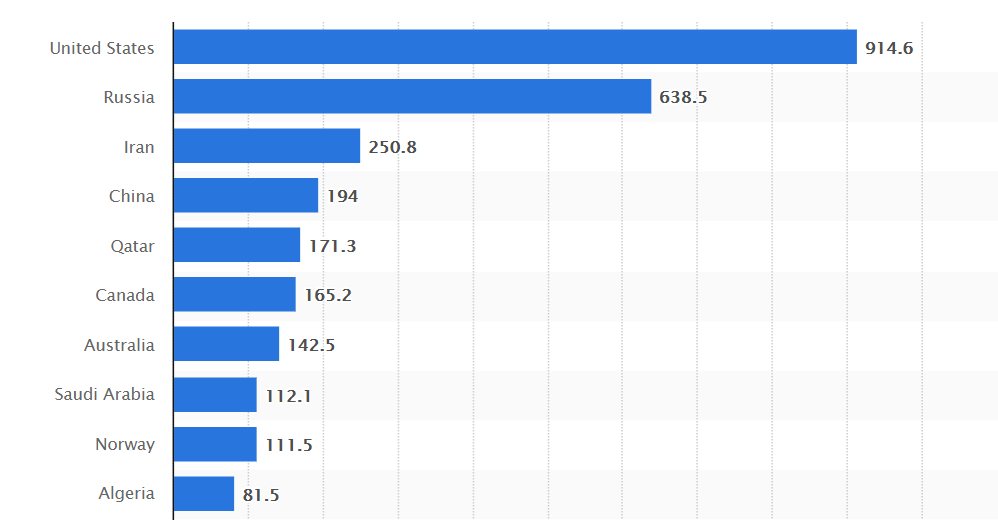 As for the production of LNG, a different trend is observable. The world’s largest exporter of liquefied natural gas (LNG) in 2020 was Australia, with an export volume of 106.2 billion cubic meters. At that time, Qatar ranked second with 106.1 billion cubic meters, followed by the US and Russia with 61.4bcm and 40.4bcm respectively. What is worthwhile mentioning is the stark difference in LNG produced between Australia and Qatar, with the rest of the producers. Since LNG was invented with the purpose of being easily transported, the LNG transportation market plays an important role in the global supply chain. During the most part of 2020, the LNG transportation market was in a downturn, as were many other segments of the global gas industry due to the pandemic. LNG exports fell 0.2% year on year in 2020 to 5682 shipments, driven by a slowdown in LNG demand amid the Covid-19 pandemic. The commissioning of various LNG carriers around the world has exacerbated this trend. In the period from 2018 to 2020, the market recorded a record commissioning of LNG tankers: 139 tankers entered service. 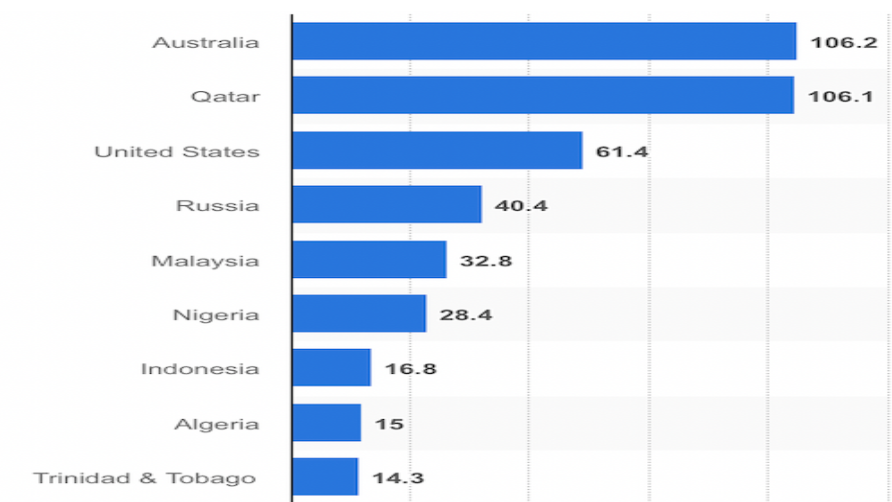 Europe, being in between numerous gas producers and having an already existing pipeline grid, is much more reliant on natural gas rather than LNG. The past months, the gas prices in most European countries have been on a tear, reaching record levels in the Netherlands and Great Britain, among others. Most analysts also acknowledge that record-high prices of gas are partly due to the increase in demand of natural gas by Asia, particularly from China. As China started importing natural gas from Russia, this diversification of its customer base has given Russia enormous leverage and control, as Europe has not really managed to diversify more quickly away from its growing dependence on gas. Some observers in Europe and the US accuse Moscow of not opening the taps sufficiently to secure a green light for the controversial Nord Stream 2 pipeline to Germany and start running as quickly as possible.

The European Union’s dependence could increase considerably if European states continue to implement their current energy policies, as plans to phase out nuclear power in several European countries, and to reduce coal consumption are in progress. These energy policies combined with the depletion of domestic gas sources, would render the dependence on Russia for gas to 50-60% of all gas imports over the next two decades if different energy policies are not adopted. The upcoming crisis in Europe on natural gas is threatening, since stocks are critically low, and a winter slightly colder than normal could cut supplies to industry, with households already paying the price.

Winter 2021/22 opens with record high seasonal gas prices, as the combination of a strong recovery in demand, extreme weather events and unplanned supply outages have led to tighter markets. Such tensions are a reminder that security of supply remains a major topic for gas markets, only a year after a record drop in demand and oversupplied markets.

The prospect of further recovery has prompted the gradual return of contracting activity and investment decisions in 2021 that would ensure sufficient medium-term supply, while the need for a transition to low-carbon gases opens new challenges for longer-term security of supply.

The impact of LNG contracting activity saw a drop in demand throughout 2020 after two years of strong activity in 2018-2019. The total volume of concluded contracts in 2020 was about 52 bcm, a 45% decrease compared to the 2018 peak of 90 bcm. In the first eight months of 2021 about 48 bcm of contracts were concluded. The uncertainty related to the recovery from Covid-19 continues to cast a shadow over contracting activity, but it is gradually returning to pre-pandemic levels.

The energy market balance finds Europe on the verge of entering a distressed position. The current rate of increase of gas prices and growing demand due to the winter ahead,  in combination with the low reserves and restricted supply from Russia might lead to a severe shortage. The following months will provide a strong indication of how the gas crisis will play out. Europe is in a position which can either choose to play Russia’s game or change its stance by limiting its reliance on the Nord Stream Pipelines, this way accelerating the transition to the green era.