The last two years will be remembered in history books as the Covid-19 pandemic, when all over the world people were forced to stay at home and limit human contact. These restrictions pursued by governments in order to fight the virus will remain in our minds as the main detrimental effect that Covid-19 had on our society. However, some consequences were not so simple to be detected but still represent concerns that will demand attention by authorities in the next future. For instance, illnesses caused shutting down of Asian factories and ports, especially in China. Insufficient supply of semiconductors limited the production of vehicles. Shortage of cargo containers, essential to ferry goods, and the unavailability of lorry drivers steered freight rates to new levels. Firms’ supply chain is bearing these outcomes and consumers will certainly find higher prices labelling products in the supermarkets.

The Wall Street Journal illustrates the story of John Baker, Vice President of Distribution at MGA Entertainment, an American toymaker. His company’s leading products are L.O.L. dolls and demand for them is high: the question is more whether MGA will be able to satisfy it in the upcoming winter.

This industry, which was worth $95 billions in terms of global sales in 2020, has been extremely affected by the pandemic: over the 3 billion toys sold every year in the USA, around 85% are produced in China. This massive reliance on a single country proved to be damaging when the disease hit the Asian State. The toy-making sector mainly counts on Christmas sales. Indeed, companies try to produce toys before summer, by outsourcing this process in China due to lower labor costs, and then want to bring their products to US shelves at least one month before the holidays, when parents purchase presents for their children.

Baker explains that in June, usually, finished goods exit Chinese factories for cargo ships, but this year at that time they were piling up in rented warehouses around the port city of Shenzhen: discrepancies with the timetable like this one depict a hectic situation. If inventories are not sold in time for Christmas they will surely amass in MGA’ storehouses, with the risk of having to be heavily discounted to not stay unsold, causing great costs to the company.

In late May, after a dozen of dockworkers at the port of Yantian were tested positive to Covid-19, Chinese authorities decided to shut down part of the province of Guangdong: Yantian harbor is the world’s fourth largest container port and one quarter of goods traded between China and US pass through it. It moves 50% more cargo than the Los Angeles’ one, which is the busiest in the US. As a result, its braking was a major damage for the toys sector. For nearly a month the port’s productivity fell at 30% capacity, creating a long backlog of containers waiting to be shipped. SEKO logistics estimated that over 160 thousand of these giant boxes were stockpiled. Other closures at Chinese ports and European borders came after, pushing delays to an intolerable level.

The outbreak at Yantian especially occurred at a critical time for toymakers supply chain: companies’ urge to ship their products back to America in time for Santa Claus arrival drove up shipping costs by bidding wars. The graph below, published by the UNCTAD (United Nations Conference on Trade and Development), shows the increase in containerized freight rates.

Figure 1: The column on the left is in terms of US dollars ($)

Baker says that there has been an attempt to move some shipping containers full of toys to different ports, but Covid restrictions limited it substantially. In addition, a further congestion in South California slowed everything down again: in September tens of cargo ships were anchored off Los Angeles and Long Beach waiting to be unloaded and there were thousands of boxes stuck in the docks and in the freight yards pending trucks. The causes root back to a sudden increase in demand for goods after a long drop during lockdown joint, with workers’ illnesses that decreased productivity at the docks.

Consequently, dwell time containers staying on the piers rose from an average of 2 to 6 days. MGA increased its effort in distributing goods by itself, incurring in extra costs for warehouse rentals and vehicular transportation. As a final result, MGA Entertainment declared that prices of little L.O.L. dolls would rise from $10 to $12, whereas bigger ones are going to sell for $35 instead of $29.

In general, new tactics have been proposed to solve these logistics issues. Some companies even resorted to a drastic and expensive solution: they began to charter ships. Such a method gives more flexibility to the businesses because they can decide to prioritize seasonal products and freely avoid bottlenecks by rerouting their freighters to less crowded ports. However, chartered vessels can transport on average around 1,000 containers instead of the 20 thousand capacity of standard cargo: therefore they do not take advantage of economies of scale, weighing on firms expenses.

Costco, Home Depot, Walmart and Target Corp. rented their own vessels, accepting to bear greater costs. This option is out of reach for small businesses, which will suffer the competitive disadvantage in the next months: due to low inventories they will be forced to raise prices.

In addition, the global supply chain crisis on the ground prompted air freight. In normal times it is not preferred since it is more expensive than maritime trade, but desperate times call for desperate measures. Businesses like Nike and Crocs are indeed paying extras to import their products on airplanes. The greater demand led the prices to new altitudes, as it is shown in the table reported below. The graph traces the cost per kg that must be paid by companies to ship their goods for three main routes. 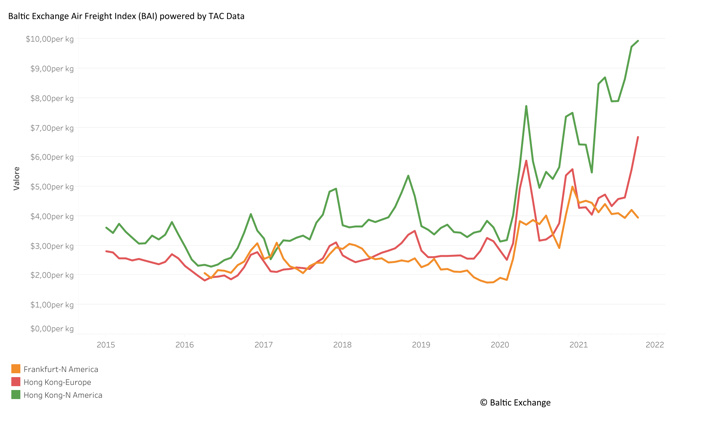 In conclusion, Covid-19 is going to be a major cause of inflationary prices. Firms are now obliged to raise them because otherwise they could not sustain the higher expenses that they are incurring. Toys giants like Hasbro and Mattel have forecasted hiking prices. From a broad perspective, many multinationals are predicting to follow this trend: Coca-Cola, Procter & Gamble and Walmart are just some of them.

Nevertheless, the Chair of the Federal Reserve Jerome Powell tried to reassure the markets by suggesting that inflation will be temporary and that, as soon logistics returns to its normality, it should come back to its target level. For sure in the first moment consumers will deal with a notable rise in prices and authorities may decide to intervene.